Thanks to QCBS, I was able to attend the Genomes to Biomes conference in Montreal held between 25th and 29th of May 2014. It was the first joint conference of the Society of Ecology & Evolution (CSEE), the Canadian Society of Zoology (CSZ), and the Society of Canadian Limnologists (SCL). The conference therefore had a very broad scope, which for me meant that I got to expand my knowledge of the field of Ecology some depth. I have been trained in the field of Evolutionary Developmental Biology (Evo-Devo), Ecology has largely been something I wished I could learn more about. Over the last few years, I have realize the need for integration of the ecological context into my models of Evo-Devo. This is now being addressed in the shape of the emerging field called ecological-evolutionary-developmental biology (Eco-Evo-Devo). The need for thinking beyond model organisms, beyond levels of organization, beyond established paradigms is becoming imminent. I would not consider myself a representative audience for the Genome to Biomes conference but I did find lots of interesting talks in almost all the parallel sessions. With a few climbs up and down the stairs I was able to juggle between different themes, from Evolution of host-parasite relationship to snail shell ornamentation. The talks about adaptation of different fishes, mammals and birds to the changing environments with some reference to man-made changes to the environment helped me appreciate the need for in depth understanding of the effect of pollutants. I understand this will certainly shape our responses for a clearer modelling of future expectations that in turn may influence our choices or recommendations for environmental and species conservation. My highlight of the conference was the realization that there is very little we actually know about the workings of the Biosphere. Neatly put by one of the plenary speakers Professor Daniel Schindler who said, “This is not rocket science, we are dealing with something much more complex than that.”

I have been working at McGill University for the last couple of years on an interdisciplinary project to study the developmental genetic basis of variation in body plans in ants and ant mimics among flies. I use wild populations of flies and induced environmental variations to introduce genetic and environmental variation in an experimental population of embryos of flies. Through a collaboration between three groups at McGill, we have developed an embryo arraying device for high-throughput imaging of embryos. With this setup we are able to artificially select for variants in embryonic expression patterns to mimic direction of evolutionary change in homologous genes across populations or species. With this project we are trying to break new ground not only in developing novel experimental methodology but also conceptually taking the powerful method of artificial selection and applying it at the spatial and temporal gene expression level.

My study system is Arthropod body plans. Body plans vary from uniform body segments to highly diversified body segments along the anterior-posterior axis in Arthropods. The evolutionary developmental studies of body plan evolution remain mostly restricted to appendage morphologies. Among insects, true flies (Diptera) represent diversity in body plans that almost parallels the body plan diversity in all of insects. The knowledge of ecological and developmental genetic basis of the evolution of body plans remains limited. The second taxon I work with is ants. Ants are one of the most ecologically dominant and evolutionarily successful organisms on our planet. It is not known how diverse body plans in ants evolved and whether the evolution of distinct body plans gave specific ant taxa any added advantage that made them so successful. Predators often avoid ants, either because they are unpalatable, or aggressive. Thus some other arthropods mimic ants to escape predation. Some also use ant mimicry to hunt ants. The morphologically diverse flies contain species within two families (Sepsidae and Ulidiidae) that mimic ants in their body plans. Their close evolutionary proximity to the model organism Drosophila melanogaster, where developmental basis of body plan morphology is best known among the arthropods, makes them an excellent system to study the evolutionary developmental basis of body plan evolution. Moreover the known ecological context, for example predator avoidance, provides an opportunity to integrate the ecological contribution into the developmental genetic basis of body plan evolution among animals using this system. 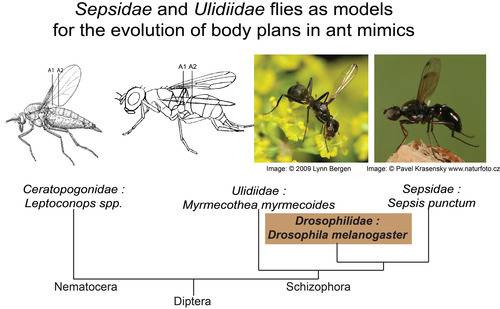 This project is innovative and interdisciplinary and requires constant feedback from a wide audience in the field. In the emerging field of Eco-Evo-Devo there are very few relevant international conferences to exchange research and ideas. The meeting of the European Society for Evolutionary Developmental Biology (EED) is the foremost of these. This year it was held in Vienna, Austria from 22nd to 25th of July, 2014. This would have been the most suitable platform for me to present my project and receive feedback. I therefore wrote an application for the QCBS excellence award that would allow me to attend the 2014 conference in Vienna. I received the award and was planning to attend the conference. However, being an international postdoc in Montreal on a work visa, I require a visa for Austria as well as a re-entry visa for Canada. This meant I had to apply for a visa in Vienna or another country before returning to Canada. At the same time, I was making a transition from postdoc to becoming a ‘research associate.’ This transition is necessary at McGill if you have spent 5 years as a postdoc after completion of your PhD. The process for that had been started by my supervisor in December 2013. For this he had to prove that he was hiring a foreign national after having exhausted all means of trying to hire a Canadian citizen or resident for the post. Practically this meant advertising the post, interviewing candidates etc. He attempted twice and did not find any suitable candidate for the post. After all this my supervisor’s application was rejected twice, once based on the fact that the advertisement was not attractive enough for Canadians, the second time because the advertised salary did not conform to any given standards. This time the salary had been chosen based on a recommendation from an official at the Ministry for Immigration Quebec. We also took help from a recognized human resource consultant in Montreal. After repeated failed attempts to understand each other’s immigration requirements we decided to forego that option. This meant I was not going to be able to leave Canada to go to Vienna.

After all this I am glad I was able to present my work at the Genomes to Biomes conference here in Montreal because I got a lot of feedback on the project and got many people excited about the possibilities of this experimental approach that I am trying to develop. I also received a broad update on the field of Ecology and Evolution that will help shape my research plan in the near future. Now that we are trying to make the leap from Evo-Devo to Eco-Evo-Devo, this was a great opportunity.