This August I wrapped up my summer field season in time to travel to the 144th annual meeting of the American Fisheries Society in Quebec City. Given that it was so close to Montreal this year – and not somewhere in the United States, as it often is – this was a great opportunity to attend the enormous annual gathering of fisheries scientists, managers, and policy makers. Interesting fact: the American Fisheries Society, founded in 1870 in New York City, is the oldest and largest professional society for fisheries scientists in the world.

The overall scope of the conference was staggering, with more than two thousand attendees from around the world converging on beautiful Quebec City, and presenting work under the broad theme of “Think and Act Locally and Globally”. It was interesting to see that while the conference clearly had a global audience, the majority of attendees were still from the United States. This was especially apparent following a plenary talk that highlighted some of the challenges that Canadian scientists face, as research funding evaporates, and freedom of communication – particularly for government scientists – is ever more tightly controlled. In the days that followed I had more than a few conversations with American researchers who were quite unaware of the increasingly difficult climate for environmental research north of their border (although I also had more than a few conversations about poutine, which was a hit with the southern crowd).

Following the plenary talks and opening remarks, myself and ~1999 other attendees were left to choose our own adventures, with the thick conference program as our guide. Up to 27 concurrent sessions during the four-day meeting meant I had to carefully strategize which talks I would attend. Despite only seeing (by my calculation) 4 percent of all talks, I took in many good presentations. One that stood out was the well-presented work of Julie Claussen, who used field surveys and historical data to examine the impact of species invasions on Smallmouth Bass in the Saint Lawrence River (spoiler: Smallmouth Bass move their nest sites much deeper in clear, Round Goby-infested water). Another that resonated with my own work was that of Jane Fencl, who examined the impact of low-head dams on native fish communities in Kansas. I walked away from this talk with new ideas on how I would approach some of my own questions. 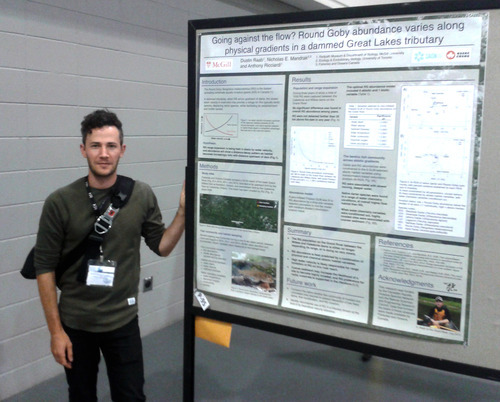 Of course I was personally there to present a poster examining the factors that facilitate establishment of an aquatic invasive fish (Round Goby) in tributaries of the Laurentian Great Lakes. Having not previously presented a poster at such a large venue I was unsure what to expect; unlike giving an oral presentation where there are restrictions on the amount of time for questions, I had much lengthier interactions with colleagues who stopped to talk about my work. On a professional level I made a number of important connections with other researchers whom I have often cited in my own work. It is always nice to put faces to names, but beyond that I have initiated some collaborations with labs that have similar and complementary interests. 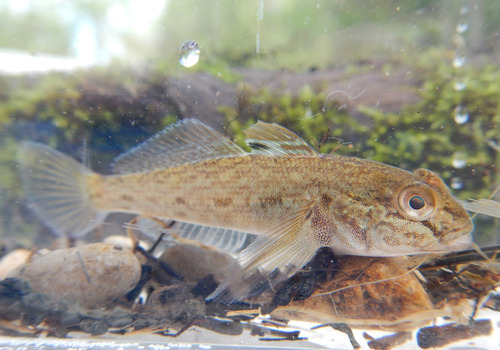 Round Goby (Neogobius melanostomus) from the Grand River, Ontario

The funding I received from the Quebec Centre for Biodiversity Science made the attendance of this meeting possible, and as my research continues over the next few years I am excited to represent McGill University and the QCBS at new venues (some perhaps farther afield).