Enable Dark Mode!
From Subarctic to Arctic in 30 days!
0 Comments

My summer job was spent tagging and mapping trees of the Northern Boreal forest in the Northwest Territories as part of a global population plot dynamic project. All I craved was seeing the Northern Lights in the two and a half months I spent in the most isolated region I’ve ever found myself. No luck[…]

Within seconds of arriving at the Kutuharju Research Station in Kaamanen Finland for my internship, there they were. The reasons that brought me to the NWT and Finland are very different one from another. The NWT was for a summer job which I thought would also satisfy my thirst to finally explore North of 60˚. When I started my MSc at Concordia in September, Finland still seemed so far away. Being there then, under the Northern Lights as an outdoor photographer, I couldn’t be more satisfied. Slightly distracted, my purpose arose once more: my objective is reindeer based. 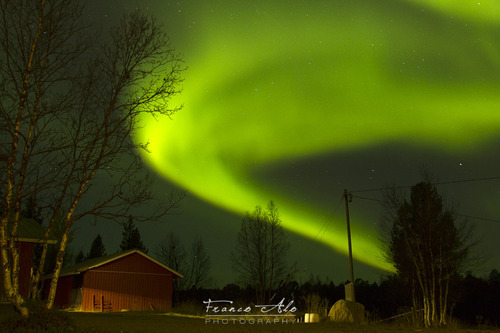 Kutuharju is home to a herd of semi-domesticated reindeer (Rangifer tarandus). With two main enclosures spanning roughly 15 km2, this is a place of reindeer science. In 15 days the objective was to: learn radio telemetry, familiarize myself both with the enclosure terrain and my study species, learn which behaviors are important during the rut and how to measure them adequately and lastly engage in some lively conversations with elitists in reindeer ecology such as Dr. Mauri Nieminen and Dr. Øystein Holand. The rut has a sensitive time window where naturally over the years it is agreed to span anywhere from September 25th – October 10th. Global climate change is creating longer periods of nourishment in the summer which is apparently according to the Sami people, affecting the breeding time of reindeer. In any case with such little flexibility, I was in the field the day after receiving my luggage (it decided to stop for wine and cheese in Paris).

I imagine like most scientists, the day you see your study species for the first time is one you cannot duplicate. I listened to the audible beeps getting louder as we hiked atop a plateau with my supervisor and two students from our lab. In what appeared to be a valley between two peaks, there were the first reindeer I saw. The following photograph was from my second sighting of the day. 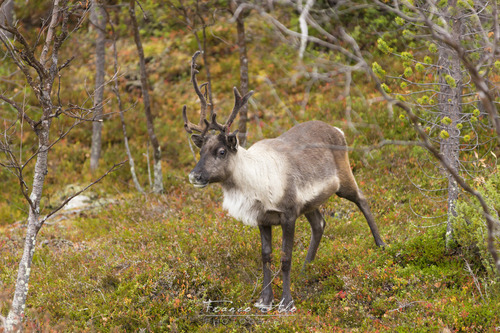 Radio telemetry within the next few days quickly grew on me and I was tested and relied on shortly after. The behavior I had to measure was fairly straightforward yet still required precise attention to both the measuring and keeping oneself aware to assure no opportunities were lost. The second to last day, I finally had the opportunity to speak to renown reindeer biologist Dr. Øystein Holand. We spoke of my experimental design for the Fall of 2015 concerning the influence of operational sex ratio on the strength in competition. Though not yet polished, it was an incredible first draft. The funding from QCBS has allowed me to gather the most valuable information straight from the source. The herders, reindeer biologists, research center caretakers have allowed me to start the journey with little knowledge in my field and quickly pick up the pace. I look forward to a year of continued learning and with the hopes of writing in the near future, another similar blog with my progress. May future recipients of a QCBS award find similar positive outcomes.