Enable Dark Mode!
Science communication as a good research pursuit, practice, and product; told through the making of our film Reexamining the forest
0 Comments

Take a step out of your science lab and come with us into the forest. In forest ecology fieldwork, our research comes to life around us, and in the forest where we work this happens to be in the form of skyscraper-tall trees draped in moss and fern over layers of green shrubby plants. In my MSc thesis I investigate the post-logging recovery of multiple ecosystem services (ie, the benefits that people derive from nature), and I am supervised by Elena Bennett at McGill and Sarah Gergel at UBC. The objective in my fieldwork this past summer (2014) at Clayoquot Sound on Vancouver Island, BC, was to measure old-growth and second-growth forest stands and then contrast their capacity to provide multiple ecosystem services, including those valued by local First Nations. A slightly unusual side objective during my field research this past summer was to make a film to communicate our research. This article explains why we made the film, Reexamining the Forest, and I also reflect on the process of making it. 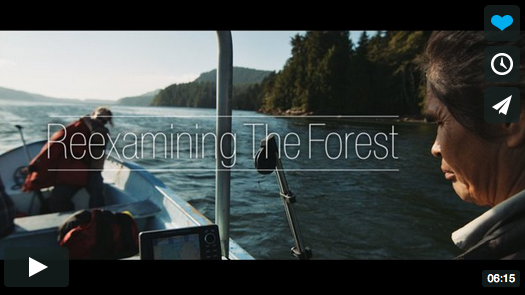 Making the film was really only a side objective; however, shortly before fieldwork began we received funds to hire a local First Nations cedar carver and also a filmmaker. This created two exciting opportunities: to do accurate surveys of some of the important cultural resources valued by First Nations in these forests, and to create a proper film, which in addition to explaining the research would focus on elucidating the significance of western red-cedar (Thuja plicata) for coastal First Nations.

The work was extremely insightful, and especially so given the diverse backgrounds of our field crew, which included three local Tla-o-qui-aht and Ucluelet First Nations: a youth (Aquila Charleson), a guardian of the traditional territory (Cory Charlie), and a cedar carver. Our cedar carver, named Joe Martin, was a master builder of traditional ocean-going canoes, which are so large that they must be carved from the trunks of large red-cedar trees. We were also joined by a PhD Student from UBC (Alex Yeung), a researcher from the BC Ministry of Forests (Dr. Andy Mackinnon), and an extremely talented filmmaker (Mark Wyatt). 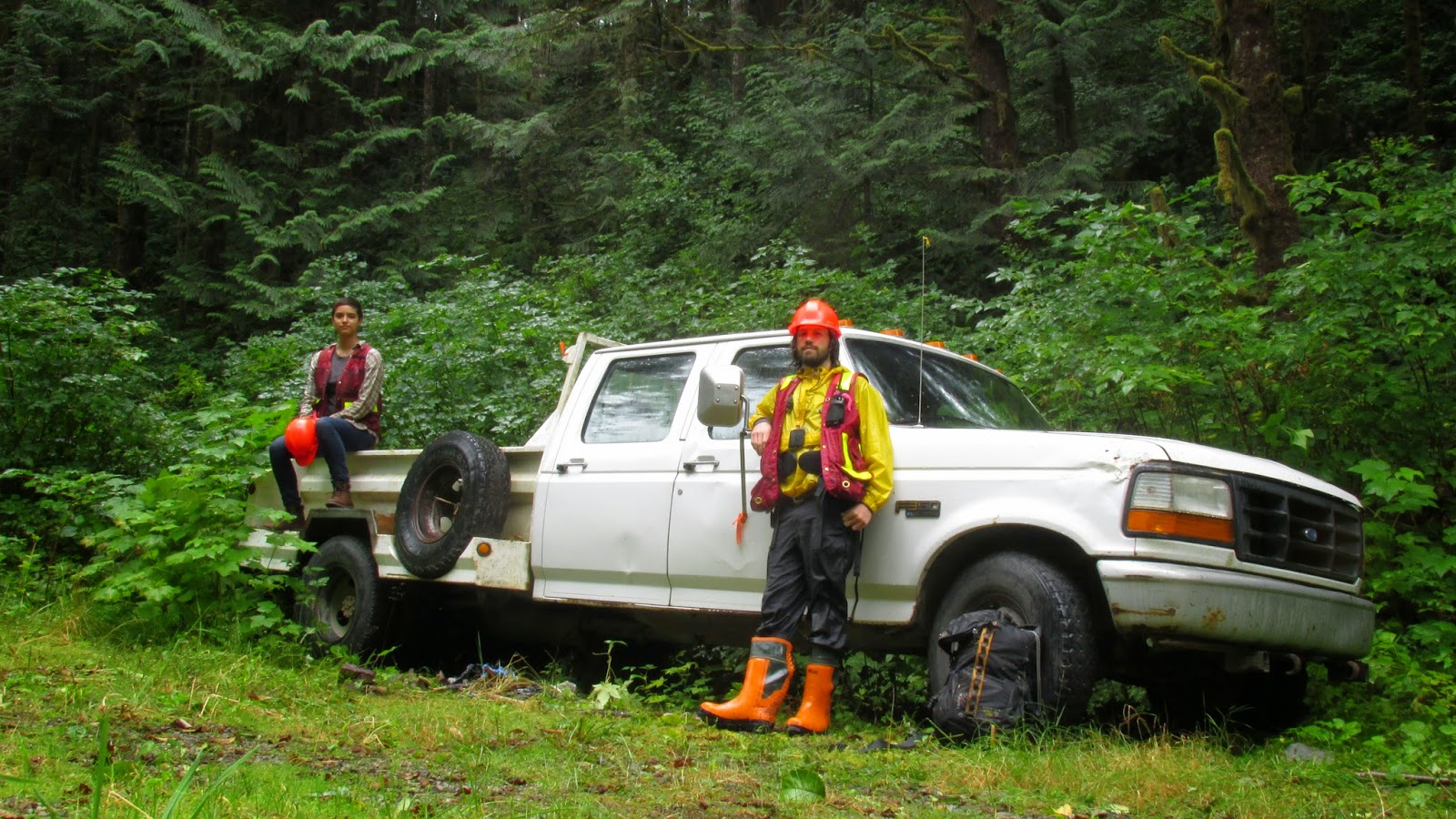 Once immersed in the fieldwork I found that the amount of effort I could direct towards the film was quite limited; however, a few things lined up to ensure our success with the filming objective. Most important, Joe Martin was enthusiastic about using film and social media to share his teachings, which meant that he was happy to be interviewed for the video. Joe’s interview is foundational for the film’s message because it provides the audience an opportunity to see first-had the significance of red-cedar for BC coastal First Nations. Also, our filmmaker, Mark Wyatt of Wyatt Visuals, was extremely helpful and skilled at focussing the broad message of the film towards key ingredients, which he thought would help the audience understand the bigger picture.

Additionally, I must confess that I had substantial previous practice in explaining my research for non-academic, general audiences and this helped immensely. Communicating science can be tough work, and once in the field I was exhausted, focussed on collecting our data, and I had very little opportunity to plan any sort of narrative. Therefore, my previous training in science communication really paid off.

I value science communication because it provides an opportunity to make my research widely accessible to the public, including to my friends and family, to foresters, policy makers and to the local First Nations whose traditional territory we are working in. The Bennett Lab at McGill, where my MSc thesis is based, works hard at this. As soon as I started my degree, my lab mates and supervisor, Dr. Elena Bennett, introduced me to a few basic tenets of science communication. For example, engage the audience right from the start and establish a context for your message. Furthermore, an effective way to frame the entire message is to distil it into several compartments. First, introduce the problem, which the research hopes to solve, and describe the implications of the problem. Then, present your research solution, and finally, state the perceived benefits of the work. Also, ensure that you speak in short comprehendible sentences, I was told, and always obey the cardinal rule: avoid technical jargon! 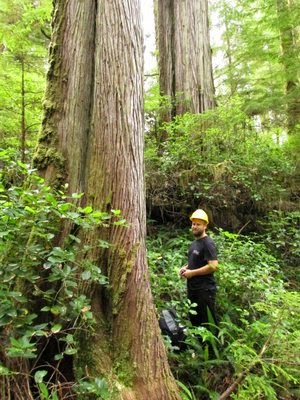 The actual practice – the most important part – can be gained through a variety of forms. For example, I have tried it out in one-minute thesis videos, three-minute thesis presentations, lightning talks, and by making science communication videos for our lab’s blog. After all of this practice, my explanations start to become memorized and increasingly easy to deliver. Once the camera started rolling I was able to explain my research without having a pre-planned narrative. Mark was still left with some clever editing to do, and we had to record a few sound bite add-ins later back in Vancouver, but we managed to get all the key pieces of the story in place before we left the field.

The result is a short film that carries benefits for the local people, and for ourselves, both as researchers and as science communicators. Many local people on the west coast of Vancouver Island already know Joe Martin but now his perspectives and traditional knowledge are increasingly accessible. Anyone with a computer or smart phone, including the local First Nations youth, can hit play and immediately learn from one of the few master canoe builders left on the west coast of Vancouver Island. From a research perspective, this film can help us achieve one of our mandates as scientists, which is to disseminate our research methods among our scientists, industry, and government partners. Lastly, like all science communication, it forces us to take a step back from the fine details and craft a clear and accessible message. Like with clear writing, this improves the clarity of our own thinking.

What I will leave you with is encouragement to practice science communication. Treat it as if you are learning any new knowledge or skill: find enjoyment in the challenge of learning it and also seek help from people who specialize in doing it; for example, sign up for a workshop on the subject. It does take a little effort to get into but unlike the months (or years) of hard work it takes to write a peer-reviewed paper, the products of science communication are ready to go within just hours of your work, and for some people (e.g., your parents, a policy maker, or local people around your research site) these efforts may speak louder than your words.

Contributions of the QCBS award to this project:

A QCBS Excellence award provided opportunity for me to receive training and logistical support from a local restoration organization at Clayoquot Sound, the Central Westcoast Forest Society (CWFS). The logistical support started in the form of help selecting study sites through a combination of aerial photos, geospatial data, and local information. When I arrived to Vancouver Island from Montreal they set me up with a local First Nations field technician (Cory Charlie) who helped me get started on how to measure important riparian ecosystem services: the hydro-geomorphic regulation and stream bank stabilization provided by fallen logs that span over streams. Salmon are a critical ecosystem services at Clayoquot Sound. However, the remarkable affect of the QCBS award was that establishing a connection with CWFS opened up new doors with the local community. It acted in our favour as we consulted with the Tla-o-qui-aht chief and council as well as Parks Canada to visit and research some remaining and accessible old-growth riparian forests (seen in film). Also, CWFS provided a great deal of in-kind support including a summer student from the Ucluelet First Nation who worked with us for the entire two and half weeks. Finally, I think that our relationship with the locals at CWFS also acted in our favour to get the legendary carver, Joe Martin, to agree to come and help us on less than two weeks notice.

All photos by Ira Sutherland. 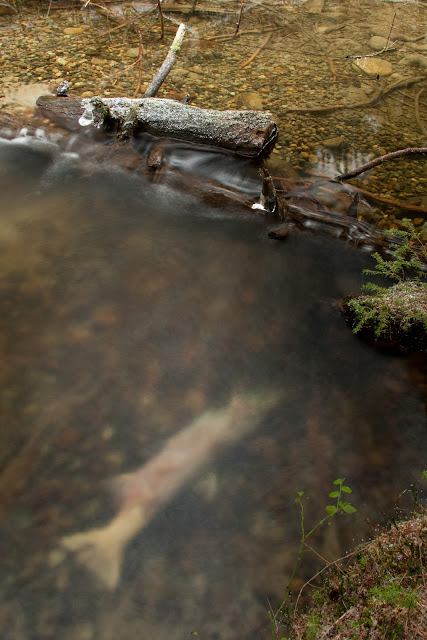